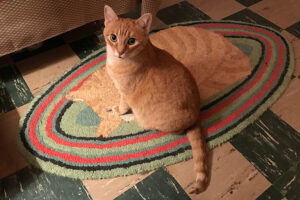 It was shortly after the untimely death of Mom’s orange polydactyl cat, Pawscar Awesome, in November 2016. She spotted one of the many Facebook postings for animals needing a home shared by Christine from the vet’s office. This courtesy post described a nine-year-old orange cat whose owner had died, leaving him in need of a home. That was me, Mitchner. The family had decided to keep the other two cats, whom they felt would be harder to place. Mom contacted the shelter that posted the ad and gave them her contact information. The owner’s daughter invited Mom to meet me. I guess Mom passed the test because I came home with her on December 3, 2016, and have become a much-loved part of her feline family. My full name was Mitchner McGarrulous.

Mom added the name McGarrulous because I was VERY talkative. When I first came to Mom’s home, I preferred to abide by myself in the kitchen, enjoying a variety of cat beds. Loneliness did not end up suiting me, though, because for a while I enjoyed joining several of the female felines in the bedroom, only returning to the kitchen briefly to play with my favorite cat toy. After some time, though, I started becoming aggressive toward Jenise. Mom thought I followed the very bad example of Rascal Spatz. To prevent conflicts while she was away, Mom decided I should stay in the kitchen. She did allow me to visit the bedroom in the evening…until I would get restless or nasty. It was probably just as well this way; I had inflammatory bowel disease and probably some food allergies, so I had to be on a special diet.

Mom made up a little ditty about me that she sang often:

Life with him is perilous

‘Cause he’s got claws!

I Departed Too Soon

Shortly after I joined Mom’s feline family, I demonstrated some problems the vet identified as inflammatory bowel disease (IBD). I got a series of B12 shots and a special diet. Mom kept trying different foods that were created to help my problem, so I would keep eating. I did get a little tired of trips back and forth to the vet, though. Finally, it was decided that I should have a scan to determine what was happening on the inside. Unfortunately, it turned out that I probably had lymphoma. I was able to hang on a bit longer, but I finally stopped eating, and Mom was forced to say goodbye on June 10, 2020–truly, an untimely death!